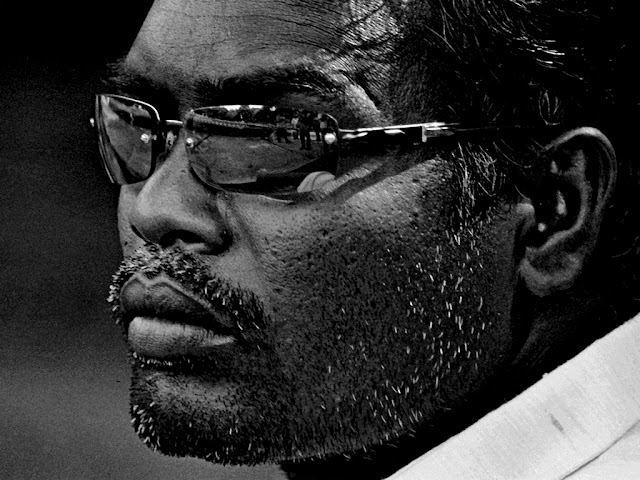 I was at Cubbon Park attending a photo shoot that was part of a workshop on "Darkroom Techniques and Chemistry". He was on a chair in the crowded park wearing shades unaware of the click I was about to make. I zoomed in and as I struggled to get the correct focus his gaze fell on me and my pointing lens. I paused in apprehension and just when I thought that I had lost the moment he turned away, the expression on his face remained unchanged... *click*

Unlike a digital camera, shooting on film can be quite exciting and at the same time filled with apprehension brought about by a lack of the ability to instantly see how the picture turned out after a click. At 300mm zoom and a shutter speed of 1/45th of a second the possibility of a camera shake was considerably high. After I developed the film and made the print, I was relieved to see that the picture came out as I had hoped it would.

I'm not a big fan of taking portraits of people using a zoom lens without asking their permission first. On this particular occasion I gave myself a pass because I felt that any kind of interaction would completely alter the moment, and his expression would never be the same the second he became conscious of my presence.